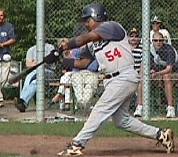 When the Challengers will face off with the Zurich Barracudas at the Heerenschürli on Saturday in a winner-takes-it-all Game 5, it will mark the 13th time in Swiss Playoff history that a Game 5 is needed to determine the winner of a Series, and the Challengers were involved in seven of them. Here are the most memorable ones in franchise history:
Playoff Finals 1999 vs. Therwil Flyers: After winning games 1 & 2, the Challengers lost momentum and were beaten by the Flyers in the next two games that led to the showdown in front of a big crowd in Therwil. The Flyers took a 7-3 lead after three innings. But the Challengers turned the game around in the top of the fifth with eight runs off Roy Allenspach and Alain Kurz. Thomas Landis finished the game by striking out the final two batters for the finals score of 12-11.
Playoff Finals 2000 vs. Therwil Flyers: Just like the year before, the Challengers trailed 2 games to 1 before winning 15-9 in Game 4, and then relied on Thomas Landis’ performance on the hill in Game 5, throwing his third complete game of the Finals for a 7-3 win to secure their record sixth national title in the franchise’s history.
Playoff Semifinals 2003 vs. Bern Cardinals: The Cards relied on their remarkable pitching, led by Severin Fries, a solid defense and patient hitting, allowing their opponents only five runs throughout the game in a 10-5 win. Scoring five runs in the bottom of the first against Thomas Landis, the suspense was gone early and the Cards advanced to their second consecutive Finals.
Playoff Semifinals 2004 vs. Zurich Barracudas: The Barracudas were destined to make it to the Finals with a strong pitching squad led by James Sanders, and the two teams battled to a 2-2 tie after four games. Sanders allowed only three earned runs in 15 2-3 innings in those four games and pitched another four shutout innings in relief in Game 5, but the Challengers did their damage to Nderim Coma and Ueli von Burg, scoring 10 times for a 10-7 win. They went on to beat the Therwil Flyers 3-1 in the Finals, winning their last Championship Title to date.
Playoff Semifinals 2007 vs. Reussbuhl Eagles: The Challengers met the Eagles in the Semis who were led by lefty Pete Soskin who posted a 1.82 ERA (2nd) with 130 strikeouts (1st), and slugger Whitney Pierce who hit 8 homers (2nd) and collected 28 RBIs (4th) during the season. The Challengers trailed 2-1 after three games, but came back with a strong Game 4, in which Harry Bregy posted a complete-game win, striking out 13 batters. The Challengers cruised to an easy 8-2 win in Game 5, with Thomas Burger pitching an eight-inning gem, allowing only one run on seven hits, no walks, while also striking out eight. The only run he allowed came on Whitney Pierce’s solo homer leading off the fourth inning. That performance earned the Challengers a spot in the Finals for the seventh time in the last 10 seasons. They never returned to the Finals since.
Playoff Semifinals 2009 vs. Therwil Flyers: After an epic 11-inning win by the Challengers in Game 4 that tied the Series at 2 apiece, the two teams got together for the winner-takes-it-all fifth game in Therwil. Reto Siegel’s sacrifice fly in the ninth inning tied the game, sending the game into extra innings. There, in the bottom of the 11th, Seppi Zwyer’s RBI-single sent Matthias Jung racing home with the Series winner. Tobias Siegrist ended up pitching a complete game with a career-high 10 1-3 innings, but the Flyers advanced to the Finals where they would beat the Bern Cardinals in four games to capture their eighth National Title.
Playoff Semifinals 2014 vs. Therwil Flyers: The Challengers managed yet another Game 4 win after trailing 2-1 with a 3-0 victory over Flyers ace Gavin Guarrera with Lowuin Sacramento delivering a masterpiece for the Challengers, striking out 14. In Game 5, the Challengers scored early but then surrendered the lead and trailed 6-3 before mounting one more big comeback in the final inning. Seantis Zeller laced a double down the right field line to put two runners in scoring position. James Sanders followed with a soft flare to right center, plating both runners and bringing the Challengers’ hottest bat to the plate. But Ryan Byrne, who set a new Swiss single season record by striking out 182 batters, grounded out to first for the final out, ending the Challengers’ 2014 campaign. 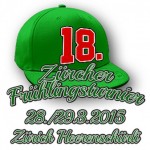 The traditional Zurich Spring Tournament will be also in 2015 the last test for the Zurich NLA-Teams before the start of the Swiss championship 2015. The tournament will take place on March 28 and 29 at the Heerenschürli ballpark in Zurich-Schwamendingen.
In addition to the hosting Zurich Barracudas and Zurich Challengers the Herrenberg Wanderers (German Verbandsliga) will participate at the 18th edition of the tournament. The starting grid will be completed by the Dominican All Stars, a team with a lot of well-known players from Latin America.
The games start on Saturday at 11am and on Sunday at 10am. The final will take place on Sunday at 2.30pm.
For further informations go to Spring Tournament

The Challengers opened their spring season with two games against their cross-town rivals Zürich Barracudas on March 22 at the Heerenschürli ballpark. In the first game the NLB-Teams faced each other. The Barracudas rallied for a 4-3 win, after the C’s led through six innings thanks to solid pitching from starter Kurt Kovac and Willy Schaub.
In game 2 the NLA-Team started a little rusty, trailing 9-1 in the fifth frame. Then the C’s started to score some runs too to close the gap to two runs. Thomas Burger, James Sanders and Chris Palatinus had solid outings from the mound, while the defense committed some errors. The C’s will gain some more playing experience, as they will participate at the 18th Zurich Spring Tournament on March 28 and 29 at the Heerenschürli ballpark.

The Challengers Juniors played their last indoor tournament of the 2015 season on Saturday, March 21 at Rümlang. The U12-Juveniles and the U15-Cadets both finished in third place. The Juveniles improved a lot during the winter season finishing the tournament with a 1-2 record, after a 7-6 win over the Lions/Rainbows, a 5-7 loss to the Therwil Flyers and a 1-6 against the Rümlang Kobras.
The U15-Cadets played together with the Dulliken TruckStar and the Bern Cardinals. The SG lost to the Kobras and Thun Hunters, won against the Black Hawks and tied with the Flyers. In the game for third place the SG walked away with a last inning victory.
The outdoor season will start on April 26 for the U12-Juveniles and on May 17 for the U15-Cadets.